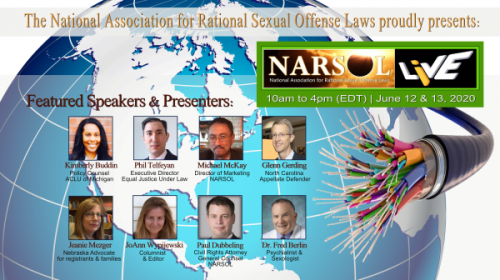 Equal Justice Under the Law
by Phil Telfeyan

Through discussion of Michael McGuire, a client subject to an archaic and barbaric registration law, Phil broadens the issues and talks about how irrational sexual offense registration laws result from a punitive mindset. Our society always thinks punishment is the way to solve problems, but it generally makes problems even worse.

For Reason in a Mad World
by JoAnn Wypijewski

Sex scandals reduce the complexity of human life to a story of good and evil. The amplification of evil and the politics of fear and sequential sex panics across at least 50 years have been drivers of the prison state and the culture of vengeance and punishment. The ratcheting up of registries, the surveillance, the exclusion zones, etc. — all of that is a product of the culture of punishment and mass incarceration, and has in turn helped to reinforce it. Abolition of the registry is just as necessary as campaigns against police violence or for due process or against mass incarceration and racial profiling. If we are to have any hope for a more sane, just, and reasonable society, it must be one fight.

In this workshop Phil opens the floor to discussion with attendees, sharing ideas and experiences on ways to reach “beyond the choir.”

The Media: Friend or Foe?
by Michael McKay

Drawing from examples across various aspects of the system, including sex offense registration, civil commitment, pretrial justice, non-violent crimes, and other areas, the workshop helps you prepare a media plan for your affiliate organization that will not only put your efforts in the proper context and your organization in the best possible light but also will assist you in advancing your goals, prepping for an interview, and avoiding common, potentially catastrophic mistakes.

Kimberly speaks about the progression and timeline of Michigan’s registry, current registration requirements, and the difficulties, impracticability, and general problems of the registry. She discusses current and ongoing legal and legislative advocacy that has been taking place in Michigan, including the Does I and Does II lawsuits, legislative responses, recommendations for reform, areas where stakeholders agree/disagree, and what the next steps should be.

How To Talk To Policymakers So They Will Listen

This presentation explores how to have an effective meeting with a policymaker and how to give persuasive testimony before a legislative committee. The value of using personal experiences will be presented as well as how to achieve maximum effectiveness.

Standing Up; Speaking Up
by Jeanie Mezger

When the Judiciary Committee in the Nebraska Legislature invited the registry community to testify about life on the registry, Nebraskans Unafraid worked hard to pull together as many people as possible to testify. They did a lot of things right to make it happen, and some of the ‘right’ things had been done years before with no idea of how important they would prove to be. This presentation also touches on the response of Nebraskans Unafraid to a recent high-profile murder of a registrant in the state.

In this presentation, Glen – the successful lead counsel in the North Carolina Packingham case – shares his observations of the developments in advocacy for registered individuals since he began his work.

Heroism and Faith: Becoming a leader in the fight for change
by Paul Dubbeling

Lasting legal change is a combination of litigation and legislation. But what do we need to make those successful? In this presentation, Paul discusses what we need, individually, to become leaders of change. 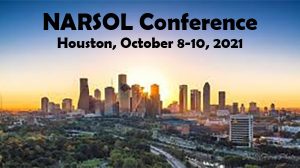 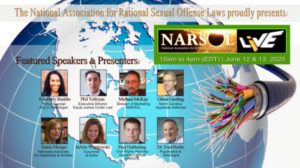 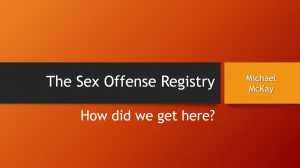